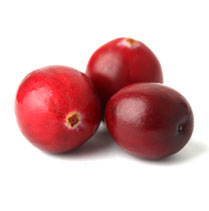 From great ways to eat them to their nutritional packed powers, cranberries are one superfood you’ll want to include in your family’s diet!

The History of the Bouncing Berry

Once called a “craneberry” due to its strong resemblance to a crane, this tart, tasty berry is a nutritional powerhouse that has been complementing holiday meals for decades. Its magical bouncing abilities were discovered in 1880 when a harvester rolled his berries from his loft to a basket at the end of the stairs in an attempt to move them more quickly. In the process, he discovered that the bruised berries were left on the stairs as the ripe, firm berries bounced to the bottom. Today Americans consume 400 million pounds of this “native to North America” fruit each year.

Native Americans recognized the nutritional properties of the berry far before science proved them to be true. They created sauces and meat cakes called “pemmican” out of the berry, and used it medicinally to stop bleeding and to help cure blood poisoning.  The nutritional properties of the cranberry were capitalized on during international voyages at sea when sailors would eat the red berries to keep scurvy at bay. Later it was determined that prevention was possible due to the fruit’s high Vitamin C content. A serving (1/2 cup) of fresh, unsweetened cranberries provides 10% of the Daily Value of Vitamin C, for a mere 25 calories! A serving also contains a fair amount of fiber (3 grams) and is free of cholesterol, sodium, and fat.

Research has shown that cranberries also contain high levels of antioxidants such as Vitamin C and flavonoids, and proanthocyanidins (PACs). These compounds help to strengthen the body’s immune system and to reduce oxidative damage (a cause of premature aging), which has been linked to several age-associated diseases. PACs, simply put, help to reduce the number of bacteria that “stick” to the inside of the body. The PACs found in cranberries demonstrate this effect to a degree beyond what other fruits are capable. That’s a powerful punch for a tiny berry!

Cranberries Make You Healthier from Head to Toe

How to Select and Store the Perfect Berry

Cranberries are available dried, frozen, fresh, and canned. When purchasing fresh berries, look for ones that are a light to dark red in color, firm to the touch, and shiny. Refrigerated fresh berries should be used within 2 months, and frozen berries are good for up to a year.

One of the best things about cranberries is that because they come in a multitude of forms, they are easy to incorporate into dishes that both kids and adults will appreciate. Some easy add-in ideas are listed below.

You can also try my absolute favorite recipe for fresh cranberry sauce. It beats the canned version every time!

Why Playing Video Games Isn’t Always Such a Bad Idea

Creating a Healthier Planet in Your Own Backyard

Alexandria is a Registered and Licensed Dietitian (RDN, LDN) employed by Lancaster General Health. She has been featured in the Lebanon Daily News, York Daily Record, Smart Magazine and blog, Fox 43, and on ABC 27. She has served as a panelist for the Giant Healthy Kids Summit and was featured as a guest on the television show "Medically Speaking". Her specialties include nutrition education, creation of health & wellness communications for print, development of nutrition focused programming, corporate wellness, weight management, sports nutrition, and type 2 diabetes.