Is It Safe to Ingest Caffeine During Pregnancy? 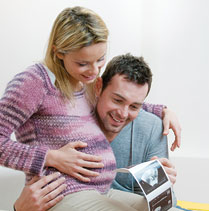 There are so many mixed messages floating around regarding caffeine consumption during pregnancy. Here are a few tips to follow.

One day, the news network may highlight a study claiming it is safe. The next day, you may read about a new study linking caffeine consumption to miscarriages. So what’s an expectant woman to do?

What does the research show?

How much can I have?

To play it safe, the March of Dimes® recommends that pregnant women and women trying to conceive limit caffeine intake to less than 200 mg per day. This recommendation stems from research published in the American Journal of Obstetrics and Gynecology in January 2008 that found women who consumed over 200 mg of caffeine per day were twice as likely to have a miscarriage as women consuming no caffeine

What does caffeine do?

Caffeine acts as a stimulant and is present in many foods and beverages. Caffeine has the ability to cross the placenta and reach the baby. It may also decrease blood flow to the placenta, which has the potential to harm the developing baby.

Where is caffeine found?

Caffeine is found in coffee, tea, colas, chocolate and some coffee- and chocolate-flavored foods and beverages. The chart below gives caffeine content for a variety of commonly consumed caffeinated foods and beverages. As you can see from the chart, there is a great deal of variation in caffeine content depending on the brand and brewing method. Generally speaking, brewed coffee contains the highest amount of caffeine per serving. Just one 16 ounce (oz) coffee from Starbuck’s puts a pregnant woman over the daily limit recommended by the March of Dimes® by 130 mg!

How can I limit my intake of caffeine? Want to learn more about eating right during pregnancy? Find out whether it is safe to consume fish, avoiding high-risk foods, and how to manage morning sickness.

Previous Post
The ABC’s of Growing a Healthy Baby, Part 3
Next Post
Quick & Nutrient-dense Meals for the Mother-To-Be