TV and its Link to Obesity 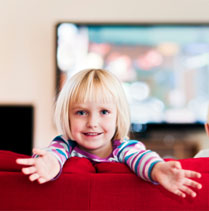 Simple ways to avoid too much TV time and to get active as a family to prevent obesity!

Ninety-nine percent of American households own at least one television, and each person watches an average of four hours of TV per day. This equals about two months of non-stop television watching per year. About 4,000 studies have been done to see how this affects children.

What the Research Shows

For example, a recent study published by the Journal of the American Dietetic Association followed a group of children from kindergarten until they were in third grade. Weights and measurements were taken four different times during this time frame. Parents were asked about their children’s television watching habits and about how often their family ate meals together.

The study found that the children who watched more television and ate fewer family meals were more likely to be overweight by the end of third grade and were more persistently overweight than the other children. The authors of the study think that television watching plays a role in weight gain due to its effects on attitudes and behaviors. This study suggests that changes need to begin in the family-life habits and routines.

Simple Changes for the Family

The best way to begin making family changes is by doing it together. Start with one or two of these ideas, to begin with, your healthier habits today!

Health and Social Consequences of Overweight and Obesity

Tabitha is a Registered and Licensed Dietitian/Nutritionist and Certified Diabetes Educator located in Philadelphia. She currently works in clinical nutrition at Esperanza Health Center, where she has been since 2006.